Where is Australia located?

Located below and south of the equator, Australia, the Island Continent, is bounded by the Indian Ocean to the west and Pacific Ocean in the east, south of the countries of Indonesia and Papua New Guinea, and west of New Zealand.

It occupies tropical to cool temperate climates from 10° south to 43° south latitude and from 112° east to 153° east longitude.

From the Coral Sea and South Pacific Ocean in the north, ocean currents sweep south along the east coast past the Great Barrier Reef, into Tasman Sea, past the island of Tasmania and into the Roaring Forties.

In the southwest, the Great Southern Ocean receives the barest hint of the warm currents swept into the Indian Ocean from the equatorial waters of the Timor and Arafura Seas, which separates the northern Australian mainland from Papua New Guinea and Indonesia. 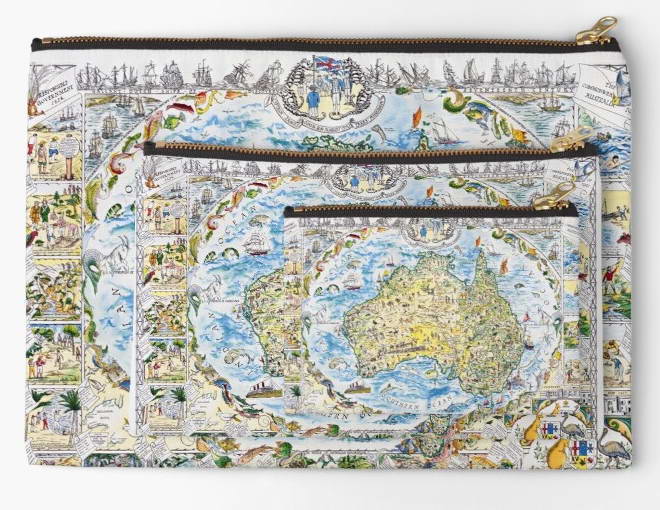 What are Australia's extreme points of land?


Cape York in Far North Queensland is the northern most point of the Australian mainland at a latitude of 10° 41.21 South and longitude 142° 31.50 East of the equator.  (That's 1,212 km, or 753 miles south of the equator.  And that's about the same distance as driving from Canberra, which is the capital city of Australia, to Adelaide in South Australia!)

The easternmost point on the Australian mainland is Cape Byron in New South Wales, at latitude 28° 38.11 South, and longitude 153° 38.22 East.  Please note.  Just because it's the furthest east point on the mainland, that doesn't mean it's the first place in Australia to "see the sunrise" each day.

The most Southern point in mainland Australia is unsurprisingly called "South Point".  It's located in Victoria at the tip of Wilsons Promontory, in Wilson's Promontory National Park, at latitude 39°; 08.20 South and 146° 22.26 East.

The furtherst west you can go on mainland Australia is at Steep Point, in Western Australia, at latitude 26° 09.05 South and longitude 113° 09.18 East.  Steep Point is part of the western boundary of the Shark Bay World Heritage Area.

If you want the southernmost point of "Australia", then South East Cape in Tasmania's remote Southwest National Park and Tasmanian Wilderness World Heritage Area is it, at 43° 38.40 South and 146° 49.30 East.

(And if you really want to get as far south on Aussie territory as you possibily can, then you'll need to hoof it to the south pole bit of Australian Antarctic Territory.)

What are Australian Seasons?

The traditional seasons are reversed to the northern hemisphere, and while there is standard business dress, it tends to comfortable and informal, unless you're a button-up 3 piece suit with tie type, who likes to wilt in the heat.

Resort style wear and lightweight clothing is suitable for most of the year, although southern states, highlands and desert regions can get below zero at night and during late Autum, Winter and early Spring.


Depending on where you are in Australia, there are also indigenous season calendars which are based on the stars, appearance of plants and flowers, and various species of migrating animals.

See also Hazards - Fire and Flood, and the climate and dress for our region.

The national capital of Australia is Canberra, located in the ACT.

The Australian Capital Territory (ACT) is self administrating with it's own legislature.

The Northern Territory (NT), despite being self administering, can still have its state laws overturned by the Federal Government.

While NSW, VIC and QLD are rarely referred to in the abbreviated form in daily speech, you'll often hear references to "the Aay See Tee" (ACT), "Ess-Ay" (South Australia), "Double-yew Ay" (Western Australia) and "Tas-ee" (spelled Tassie, for Tasmania). The state capital of QLD - Brisbane, can also be abbreviated to "Brissie" (Bris-ee).  You'll sometimes also see it referred to as "Brisvegas".

Although they have local government elections, Lord Howe Island off the east coast of Australia in the Tasman Sea, is administered by NSW.

The Australian External Territiories include Norfolk Island in the Pacific Ocean and the Coral Sea Islands Territory, the Cocos (Keeling) Islands, Christmas Island and the Territory of Ashmore and Cartier Islands in the Indian Ocean, which are are administered from Canberra.

Australia's most southerly territories, Heard Island and McDonald Islands, along with Macquarie Island, are conservation zones, while the Australian Antarctic Territory claim covers more than 30% of that continent, (which comprises 9.6% of the world's land surface area).

In the south eastern states (NSW, ACT, VIC and TAS) AEST becomes Australian Eastern Daylight Time (AEDT), and clocks are advanced one hour to GMT +11 to observe Daylight Saving, from the first Sunday in October and ending on the first Sunday in April, covering from mid Spring throught to early Autum.

In late Spring and all of Summer, New South Wales operates on Daylight Saving (AEDT) while the state of Queensland remains on Eastern Standard Time (AEST), creating a one hour time difference.  Visitors to our region: north east New South Wales - the Northern Rivers of NSW, and the Gold Coast region of SE QLD, should keep this in mind when making appointments and touring the region, especially for airline flights to and from Gold Coast Airport (which operates on QLD time), retail and commercial opening hours, and events which start early in the day, for example - Weekend and Farmers Markets.

At the NSW/QLD border on Boundary Street, and also Point Danger Lighthouse, you can literally hop backward and forward in time (depending on your viewpoint), and also stand astride the state border and be in two timezones at the same place, thanks to this anomoly.