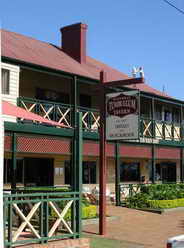 In the 1840's, the activities of cedar getters in the region had opened up the dense subtropical rainforest.

By the late 1860s a small community sprang up on the northern side of the junction of the Tweed and Rous (known locally as the North Arm) rivers, to service the timber trade and its hard toiling workers.

Originally called the "Tweed Junction", or just "The Junction", the name was changed to the aboriginal derivation of "Tumbulgum" (proun. tum-BUL gim NOT tumble-gum) in 1880 at the behest of residents, whose petition said the name meant "meeting place of the waters".

This is contested in some quarters, with another translation being "a large fig" or "a wild fig tree".

By this time, development was proceeding faster on the southern bank of The Junction. In 1885, the arrival of the telegraph saw the South Tumbulgum post office and telegraph office combine to be known as Tumbulgum, and the original post office became North Tumbulgum.

Accommodation in Tumbulgum and nearby

from selected tour operators below.

The establishment of the first public school in the Tweed Valley, and a thriving commercial district including a bank, led many people to beleive that Tumbulgum might outshine Murwillumbah in importance, but an economic depression in the early 1890s dashed these hopes.

Today, Tumbulgum is a picturesque village with views over cane farms and to the foothills of the caldera, conveniently located just off the Tweed Valley Way, where you can pick up fresh produce direct from the grower at a Farmers Market on the corner of the highway and Tumblegum Drive.

A handful of seasonal private weekly holiday rentals come and go, but most holiday accommodation is available at larger settlements nearby.

Alternatively, why not experience Tumbulgum (and the Tweed river upstream to Murwillumbah) as many day visitors and locals do, from the water, with a houseboat holiday?

Popular with locals who come for the riverside picnic facilities, boat hire, public wharf and boat ramp, visitors can stretch their legs with a stroll along the heritage shop fronts or to partake of the enormously popular lunches and evening meals at the Tumbulgum Tavern.

Local Murwillumbah tour operator Mt Warning Tours offers a range of half and full day guided stand up paddle (SUP) board and kayak tours, as well as hourly kayak and SUP equipment hire for self guided tours.

Browse for gifts and souvenirs at the local arts and crafts gallery or antique shop and visit the historic Tumbulgum Cemetry, the first in the Tweed Valley, and resting place of many of the area's European colonists from 1887 to 1947.

A plaque monument to well known local Faith Bandler is a feature on the river bank opposite the tavern. 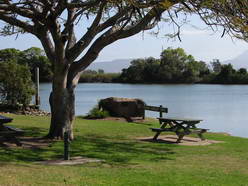 North Tumbulgum also boasts a very active land and rivercare group made up of local landholders, and you can see the fruits of their labours in along the river bank and in various rainforest pockets.

Getting here.  Tumbulgum is about 15 Kilometres (klm) north of Murwillumbah (NSW), and 20 kilometres south from Coolangatta (QLD). It's around 846 klm - about 10 hours drive north from Sydney, and approximately 98 klm - about 75 minutes drive south from Brisbane, via the Pacific Motorway.

Driving options include the Tweed Valley Way via Murwillumbah in New South Wales, and the Bilambil and Terranora scenic ridge drives via Tweed Heads and the Gold Coast from Queensland.

Daily interstate coach services are available from Coolangatta and Murwillumbah to Brisbane, Sydney and Melbourne, and daily or overnight train service is available from Sydney to Brisbane via coach transfer at Casino.

Northern Rivers Carpool provides locals and visitors with the opportunity to share transport in the region.