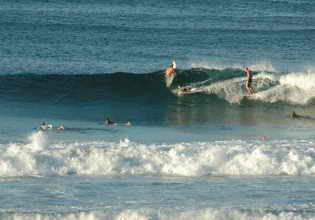 Located at the mouth of the Tweed River, the Twin Towns - Tweed Heads (New South Wales) and Coolangatta (Queensland) share a main street that straddles the state border.

Just a 30 minute drive from Murwillumbah and the rain forests of Mt Warning and Springbrook National Parks, the area has re-established itself as a family resort destination, with a number of apartment and resort developments taking advantage of its historical popularity.

Accommodation in Tweed Heads and nearby

Search Tweed Heads / Coolangatta accommodation via Booking.com or book from the links below

from selected tour operators below.

Here you will find a cornucopia of places to stay, ranging from 4 star hotels to pensions; from luxury serviced apartments to backpacker hostels and caravan parks.

Whilst the sporting clubs with their gambling and entertainment facilities cater to those who love the nightlife, the beach and ocean are still the primary natural attractions, with water based activities of all sorts easily accessible from here.

The Twin Towns can best be summed up by the three Esses: Sun, Sand, Surf.

Some of the best sun bathing, swimming and surfing in Australia is found at local beaches, with free barbeque and picnic facilities provided by Tweed Shire Council and Gold Coast Council at adjacent beachside parks. 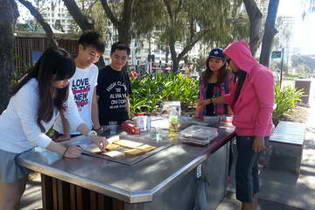 You can rent a tinny (aluminium runabout) or barbecue boat to go fishing in the Tweed estuary and broadwater, or take a river cruise serving gourmet seafood meals aboard.

Fishing charters will take you on day trips "outside" for ocean fishing, or if your sea legs aren't quite up to it, check out the local bird watching walks, with a number of accessible walks around the Tweed River and estuary.

Or if you prefer, take a guided day tour through the hinterland to the the rainforests, or take the kids to the Gold Coasts' famous theme parks.

And when you're too pooped to make like a masterchef in the kitchen, there are more than enough cafes, restaurants and eateries to choose from, from a stroll along Marine Parade and Griffith Street.

Minjungbal Museum and Cultural Centre Updated is a NSW NPWS Historic Site with a mangrove boardwalk and walking track winding through the site to an amphi-theatre, and a free picnic and BBQ area.

The Centre has a fine museum, and a shop offering aboriginal art, crafts and souvenirs. Indigenous interpretive tour guides are available by arrangement for private tours and group tours to the museum, which is currently open 10am-3pm Monday to Wednesday. 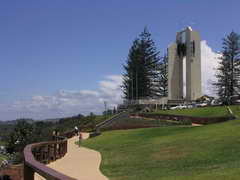 The Walk of Remembrance and Centaur Memorial is located on the headland at Point Danger, straddling the New South Wales and Queensland state border at the twin towns of Coolangatta and Tweed Heads.

Fingal Head is famous for being named after Fingal in Ireland, because the basalt headland was thought to be similar to the Giants Causeway there.

You can visit the "Giants Causeway", watch dolphins play in the offshore surf, and search for Humpback whales as they travel past on their annual migration each year.

The beach and lighthouse can be reached through remnant coastal rainforest which is being regenerated by the nationally recognised and award winning efforts of the Fingal Dune Care Group and Kingscliff High School.

Cook Island is located just off the Fingal Head coast, and is a popular diving spot. 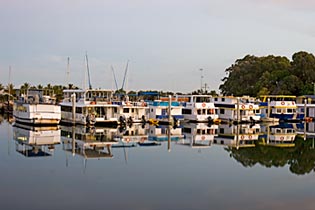 The Gold Coast stretches north from the Twin Towns for about 30 kilometres. Brisbane, said by some to be the "prettiest little city in the world" and by others to be "the biggest small town in Australia" is about 90 kilometres and 60 minutes away.

It can truly be said that Tweed Heads and Coolangatta stand between civilisation and the wilderness.

Here you can enjoy a Gold Coast stay, the beaches and the nightclubs, the rainforests and the retail therapy, all in the same day if you've got the energy!

Getting here is easy: Located just a few minutes from the Pacific Highway, Tweed Heads/Coolangatta is about 11 hours drive north from Sydney and about 60 minutes drive south from Brisbane, via the Pacific Motorway.

Gold Coast South East rail line runs almost parallel to the M1 motorway, with currently only six train stations on the Gold Coast line, at Ormeau, Coomera, Helensvale, Nerang, Robina and Varsity Lakes.  It links up to the primary Queensland Rail network and is part of the QLD Rail Translink service.

The recently built Gold Coast Light Rail network connects 16 stations from Gold Coast University Hospital in Southport to Broadbeach South (near Pacific Fair), with services every 15 minutes from 5am to midnight 7 days, and every 30 minutes midnight to 5am on weekends.

Regular local bus services with Surfside buses, will take you from Murwillumbah and Pottsville in the south, to the Gold Coast and theme parks in the north.